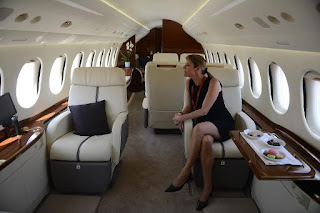 
Once again, we are stretching the boundaries of what a "Private Aircraft" can do for you, helping you accomplish more. "The Falcon 8X."


And thanks to overall design enhancements, the "Falcon 8X" is every bit as fuel efficient as the Falcon 7X.


It sits at the top of Dassault’s six-strong product line, which includes the in-development 5X.

outside falcon 8x, falcon 8x exterior, private jet charter
The large-cabin, long-range twin jet – the first of a family of wide body Falcons planned by the company – was rolled-out in June, and is scheduled to make its maiden sortie next year.


It's said that the margin of victory in life can sometimes be measured in inches. Dassault seems to think so, as it is betting that another 43 inches of fuselage length will help make a big difference when it comes to the Falcon 8X.


Dassault claims the extra fuel capacity boosts the 8X’s range by 500 nm. At a maximum of 6,450 nm, the actual range improvement over that of the Falcon 7X with eight passengers aboard is closer to 770 nm.