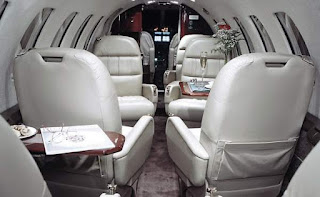 
The Encore+ offers to its customers some facilities like: increased efficiency, a new integrated avionics suite, increased payload capability and improved cabin lighting.


Also known as the model 525C, the Cessna (a Textron company) Citation CJ4 business jet first took flight as a production model on 19 August 2008; the CJ4 prototype flew for the first time just three months earlier on 5 May 2008.


The aircraft features two of the new Williams International FJ44-4A electronically controlled full authority digital engine control (FADEC) engines, which are capable of producing 16.11kN of thrust each; Cessna states that the CJ4 can climb to over 13,000m in under 28 minutes.


The aircraft achieved FAA type certification in March 2010. The first Citation CJ4 featuring GreenTrak flight software was delivered to an undisclosed customer in April 2010. The second delivery was made to a private operator in UK in October 2010.


The CJ4 is certified for up to eight passengers and two crew members. The aircraft also has a Venue cabin management system by Rockwell Collins, looking after electronic entertainment and controlling the cabin's cooling and heating environment.


The CJ4's 5.29m-length cabin is usually configured for six passengers but is certified for eight, plus two crew members.


Very slightly shorter in cabin length at 5.28m, the Encore plus is usually configured for seven passengers but like the CJ4 is certified for eight, plus two crew members.


The baggage compartments for the CJ4 and Encore plus are 1.84m³ and 2.01m³ respectively.


Cessna is well known for paying exceptional attention to detail when they create their jets and the Citation Encore+ is certainly no exception.


Considered by many to be the finest jet in Cessna’s arsenal, the Encore+ is able to fly for significant distances and take off and land on small runways – all while carrying a good amount of cargo.


For these reasons, the Encore+ is often said to be a larger jet in a light jet’s body.

An improved wing design allows for both drag at high speeds and superior handling at lower speeds.


The Encore’s increased performance allows for faster climbs to altitude – translating into a more comfortable ride – as well as additional range.


Built in 2006, the Encore+ boasts increased efficiencies, a new integrated avionics suite, increased payload capability up to 340 lbs, and improved cabin lighting over its previous model.