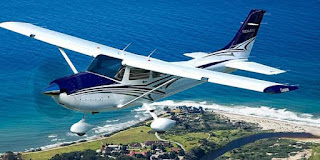 
The 182, or Skylane (as it's been called since its second year on the market), isn't the fastest four-seater in the sky, it's not the sleekest, the most modern looking or the most technologically advanced.


What it was, and remains today, is a solid, safe, good handling, decent-sized load hauler with good range and enough speed to get the job done.


Whether that job is hauling a load from one side of a rural county to the other or flying four friends to a vacation resort three states away. It's an extremely versati