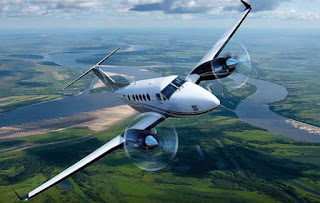 In May 1980, the model B200, which featured the PT6A-42 engine and a bleed air sytem which increased cabin pressurization to 6.5 psi.

This went into production and remained an offering through 2007 with over 2000 aircraft manufactured.

The King Air B200 is powered by a pair of Pratt & Whitney Canada PT6A-42 turboprop engines flat-rated at 850shp to ISA + 26C, each driving a McCauley four-bladed, full-feathering, reversible, constant-speed propeller. Engine inspection interval is 3,600 hours.

The King Air B200 instrument panel includes the two-tube Collins EFIS-84, with the attitude display positioned above the nav display, and Collins APS-65H.