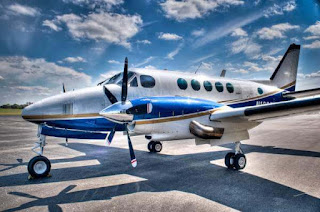 In January 1964, the first Beechcraft 65-90 took to the air. Based on the piston-engined Model 65 Queen Air, the -90 featured the then-new Pratt & Whitney Canada PT6A turboprop powerplants in place of the earlier 65’s Lycoming flat-six piston engines.


A pressurized model was developed, and was designated the King Air 90. Many variants followed including the PT6A-20-powered A90 and B90, and the C90 powered by the -21 variant of the PT6A.


In 1969, Beech introduced the Model 100 King Air. It featured a 4.2ft. stretch of the -90’s fuselage, a new wing derived from the wing of the Model 99 Airliner, and enlarged tail surfaces.


In October 1972 Beech began deliveries of the A100, whose detail refinements included four-bladed propellers which significantly decreased cabin noise levels.